The Faculty of Forensic & Legal Medicine (FFLM or Faculty) of the Royal College of Physicians in London is a professional body which provides training and sets standards and qualifications for doctors working in the criminal justice system with vulnerable patients such as prisoners, sexual assault victims, asylum seekers and abused children. www.fflm.ac.uk

In 2015, Sandy McLean PR began working with the Faculty to build PR and public affairs capability from the ground up and provide strategy, planning and ongoing execution for a PR/public policy programme. Media relations, content creation, and issues management have delivered massive increases in engagement with key journalists, regulators and allies.

Police detainees (prisoners) are the biggest group of patients seen by forensic physicians, nurses and paramedics. This patient population has an over-representation of mental health issues, drug and alcohol misuse, acute drug and alcohol intoxication, and alcohol and drug withdrawal, and they require specialist care.

The Faculty’s work is not easily or widely understood, even by government entities charged with oversight and regulation of the criminal justice system.

Sandy McLean PR designed a communications programme to position the Faculty as the foremost expert resource on forensic and legal medicine. Key objectives were to secure the adoption and application of FFLM standards in all appropriate settings, help ensure justice in criminal proceedings, and secure the FFLM a place at the table with policymakers and elected representatives. 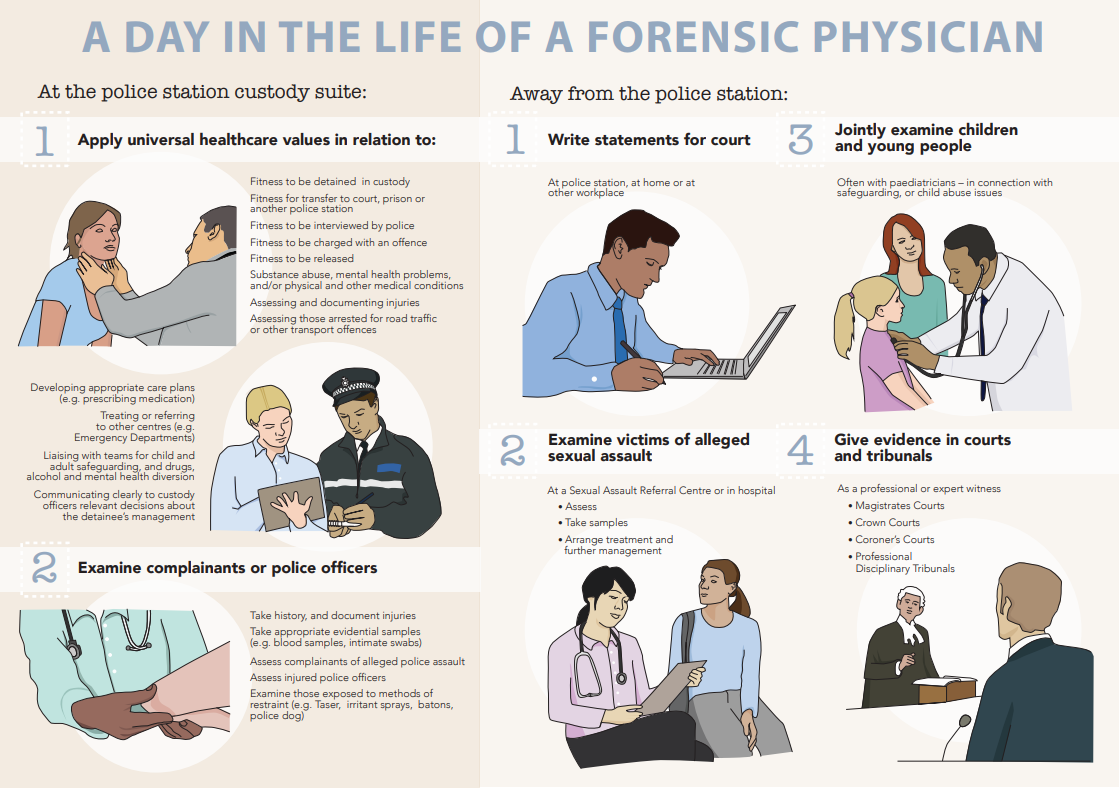 Media relations are a key component of the ongoing programme, and require building relationships with journalists throughout the UK covering specialist healthcare, criminal justice and government policy. Content creation for media and policymaker outreach includes infographics, Frequently Asked Questions, and a video explaining who the Faculty are and what they do. Sandy McLean PR also manages integrated FFLM social media, using Twitter, Facebook and LinkedIn.

Media interest in the FFLM increased soon after the launch of the PR and public affairs campaign in 2015, and has continued to grow. FFLM experts have been featured in publications such as Police Oracle, Nursing Times, Law Society Gazette and GP Pulse, as well as the BBC and other major UK media.

Faculty representatives have become sought-after contributors to public debate about a wide range of medical and human rights issues. One example: FFLM provided evidence and made recommendations in Dame Elish Agiolini’s review into serious incidents and deaths in custody in the UK.

This website uses cookies to improve your experience while you navigate through the website. Out of these, the cookies that are categorized as necessary are stored on your browser as they are essential for the working of basic functionalities of the website. We also use third-party cookies that help us analyze and understand how you use this website. These cookies will be stored in your browser only with your consent. You also have the option to opt-out of these cookies. But opting out of some of these cookies may affect your browsing experience.
Necessary Always Enabled
Necessary cookies are absolutely essential for the website to function properly. This category only includes cookies that ensures basic functionalities and security features of the website. These cookies do not store any personal information.
Non-necessary
Any cookies that may not be particularly necessary for the website to function and is used specifically to collect user personal data via analytics, ads, other embedded contents are termed as non-necessary cookies. It is mandatory to procure user consent prior to running these cookies on your website.
SAVE & ACCEPT